Dr.-Ing. Kalman Graffi is Principal Scientist at Honda Research Institute Europe GmbH. Prior to this, he was W1-Professor for the „Technology of Social Networks“  in the Institute of Computer Science at the University of Duesseldorf in Germany. Kalman received 2006 a diploma degree in Computer Science and a diploma degree in Mathematics from the Technical University in Darmstadt, Germany. In this time, he also obtained the IT-Security Certificate by the Competence Center for Applied Security Technology (CAST) in Darmstadt. From 2006 to 2010, he was a PhD student at the Multimedia Communications Lab at TU Darmstadt, Germany. In 2010, he obtained his doctorate degree (Dr.-Ing.) from the faculty of Electrical Engineering and Information Technology at the Technische Universitaet Darmstadt with summa cum laude („mit Auszeichnung“). Before joining the University of Düsseldorf in 2012, he was senior researcher at the  „Theory of Distributed Systems“ group at the University of Paderborn. He left the University of Düsseldorf in June 2019 and started as Principal Scientist at Honda Research Institute Europe GmbH.

He has acquired several projects sponsored by the industry, the German Research Society („Deutsche Forschungsgemeinschaft (DFG)“, the German Federal Ministry of Economics and Technology and the German Federal Ministry of Education and Research. In 2016 to 2019 he conducted several projects for the German Federal Ministry for Research and Education (BMBF) via the Arab-German Young Academy of Sciences and Humanities (AGYA). The projects cover topics such as „Sup-Press: Freedom of Speech under Attack in the EU and Arab World„, „Egyptian-German Partnership on Practical Evaluation of Networked Nano-scale Devices„, „Academic Matchmaking: Supporting a South-Norh Scolarship Cooperation„, „Distant Teaching with Telepresence Robots„, „Make a difference: Ideen aus aller Welt„, as well as „Twinning for Innovation„. In 2014 to 2018 he received funding from the Deutsche Forschungsgemeinschaft for his projects on „Decentralized Monitoring of large-scale Overlay Networks (OverlayMeter)“ and „Setup and Routing in Opportunistic Networks with unrooted Android Smartphones using WiFi and Bluetooth„. At the same time, he was part of the NRW Fortschrittskolleg on „Online Participation„. In 2015 to 2016 together with Powerfolder (dal33t GmbH) his project on „P2P-based Data Synchronization between mobile Devices in local Networks“ was funded by the German Federal Ministry for Economic Affairs and Energy (BMWi). Finally, in 2014 to 2016 his project on „Convergence of Hierarchical Overlay Networks (OverConverge)“ was funded by the Strategic Research Fund of the Heinrich Heine University of Düsseldorf.

In his position he researches and teaches protocols and mechanisms for complex, secure and self-managing communication and compute networks with different methodologies to implement this vision. His research focus is on building reliable, secure and highly scalable computing environments through dynamic overlay networks, mobile opportunistic networks, multi-agent systems and argumentation networks, in which autonomous, unreliable and heterogeneous actors want to offer a common, reliable and quality-controlled service. His concepts can be applied in global-scale computer networks, in wide-area wireless mesh or opportunistic networks as well as for large-scale nano or robot swarms

He received several awards for his work on secure and decentralized communication platforms and their impact on society. In March 2015 he was awarded the title „Young Scientist of the Year 2014“ (Nachwuchswissenschaftler des Jahres 2014) by Academics.de. In 2014, he was elected as member in the Arab-German Young Academy of Sciences and Humanities (AGYA), and in 2015 he was appointed as „Junior Fellow“ of the Gesellschaft fuer Informatik, both for 5 years. In 2016 he was elected as member of the Young Academy of Sciences and Literature | Mainz and of the Young Forum: Technical Sciences (JF:Tec) both for 4 years. He is founding member of the „Düsseldorf Institute for Internet and Democracy‘‚. Being in dialogue with political activists in the Arab word and outside, allows him to learn the requirements for secure decentralized communication platforms from first hand and to test his solutions in places where they are needed. 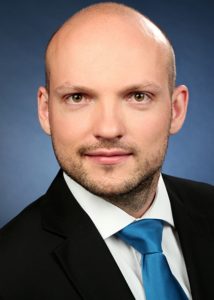